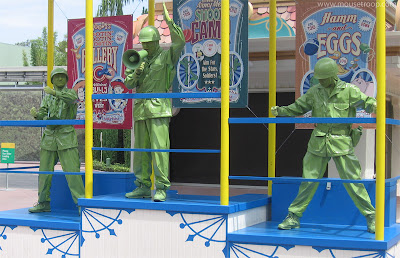 Our recent post on Toy Story Midway Mania has got me thinking back on the attraction's first summer at the resort. It's hard to believe the ride will soon reach its fifth anniversary!

Midway Mania was the first major step in "fixing" the old DCA, and the loyal Green Army Men were sent outside the park's borders to spread the word via a clever little show in the Esplanade. The performers did a great job, drawing crowds as they drummed up excitement for the new ride/game.

You don't often see Disney characters performing outside the turnstyles; this was actually a free little show that anyone could enjoy -- even if they'd just come to the resort to stroll through Downtown Disney.

I'm sure I'm not the only one who felt a bit sorry for these guys on that particular summer afternoon; they were performing in nearly hundred degree heat.
Posted by Rich T. at 12:22 AM