Way back before Six Flags took ownership...back when the Goldrusher mine train was the park's biggest coaster...when not one, but two of the world's tallest skyrides soared above its landscape..back when pay-one-price admission was about eight bucks...Southern California's Magic Mountain had a completely different character from what customers find there today; it offered a much more mellow, easygoing type of park experience.

Today, I've got seven photos from my 1975 visit. Sadly, most of the rides seen in these shots are long gone. All but the first and last pictures were taken from the long-departed Metro Monorail. 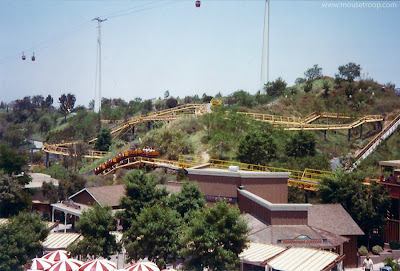 Goldrusher, thankfully, still exists, and here you can see most of its layout. The first drop/turn and a second lift hill are hidden on the other side of the...er..."mountain." Goldrusher is mostly notable for its neat terrain-hugging route and a dynamite high-speed helix finale. In the background, one of the park's two Eagle's Flight skyrides gave amazing views; look how high up that thing went! 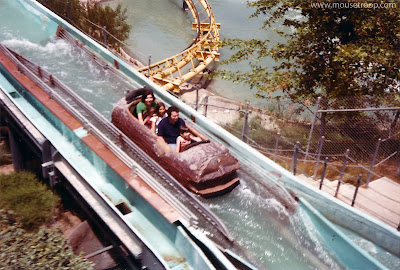 After tunneling through the hill, the Metro emerged over the Log Jammer where the flume crossed over Goldrusher's first drop/turn. Log Jammer, seen here approaching its second lift, was one of the world's longest and tallest flume rides. It was recently demolished to make way for a new roller coaster. As if Magic Mountain didn't have enough coasters these days... 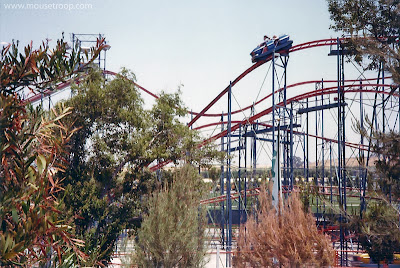 Speaking of coasters, the Mountain Express (long gone) was relatively new back then. It was fast and fun -- definitely the best "portable" style coaster I've ever ridden. 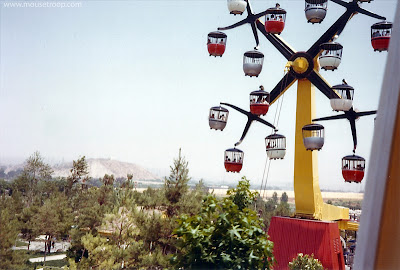 My own handwriting on the back of this photo said it best, "Lousy picture of the Galaxy taken from the Metro." The Galaxy was certainly an unusual Ferris Wheel-like ride. One side spun while its duplicate loaded at ground level, then the whole mechanism tilted 90 degrees to reverse the roles. It was later torn down and replaced with a rocking pirate ship and a spinning swing. Boo. 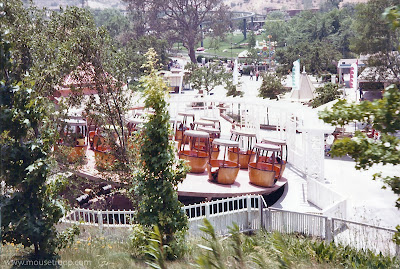 I've never understood the point of these "Crazy Barrel" rides that were so popular in the Brady Bunch era of theme parks. It was like the Teacups, but then the platform tilted, making the barrels harder to spin. Way in the background, you can see part of the Grand Prix Raceway...where Dreamfinder once worked (be sure to read Ron Schneider's book, From Dreamer to Dreamfinder -- it's awesome)! 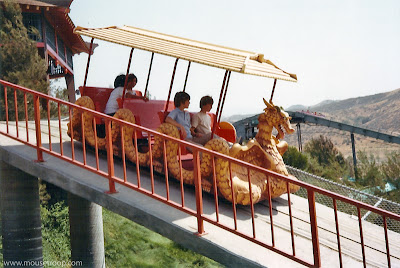 Ah (and awwwww), it's the Dragon! Probably not one of the park's better investments, it was a very, very, very slow cable car ride that served as transportation from the back of the park to the top of the hill. It was nicely themed, with appropriate background music piped along the course. The cars never stopped moving; you boarded from a (slowly) rotating station platform. Then you'd wait as the car kept crawling along...and eventually you'd clear the station and begin your interminable journey. This is a defunct ride everyone misses...kinda.

In the background you can see the (still in operation) Jet Stream flume ride.

Today, of course, the park is known as Six Flags Magic Mountain, and its rolling hills are now host to a spaghetti bowl of coaster tracks. It's a thrill-seeker's must-visit, but I'll always prefer the quieter Mountain that provided a great, relaxing day of fun just north of Los Angeles.