Governor John Ratcliffe still appears in the Walt Disney World version of Fantasmic, but out West in Disneyland, Pocahontas's arch-foe hasn't been seen in quite a while. He's not the most memorable of Disney's animated villains, but he certainly made an impression as a walk-around character. 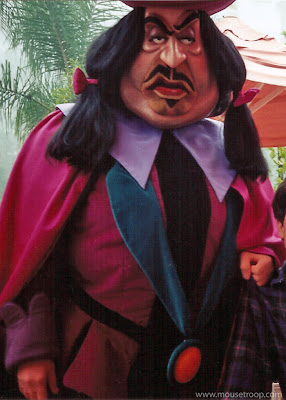 My encounter with Ratcliffe at a 1995 Disneyland Hotel Character Breakfast was definitely not like a meet n' greet with Mickey or Goofy. When the Governor reached our table, he halted and pointed an accusing finger at my Pocahontas button (handed to every patron at the door). He unfastened it, examined it, then dropped it into my scrambled eggs. With gestures, he asked to borrow my napkin. He blew his nose in it, then rubbed it into my hair, much to the delight of every guest around us. Then he posed for a picture and shook my hand for being a good sport. As he turned toward the next table, the waiting family braced themselves, laughing nervously.

I suddenly realized how much fun playing a walk-around villain in the Disney parks must be. What other cast members get to be rude and surly -- and leave happy guests in their wake? Timing and an instinct for reading the audience are essential to pulling it off, and the cast member bringing Ratcliffe to life that day managed to turn a relatively minor Disney villain into the most popular character of the morning.
Posted by Rich T. at 2:12 AM