Disney's Fantasyland dark rides invented a new language of storytelling, where the motions of the ride vehicle became as important to the story as the sights and sounds. Of all the non-Disney dark rides I experienced growing up, only one told a story as creatively as Disneyland's adventures. 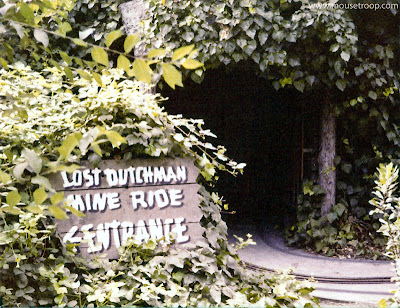 Back before Sally Corporation started creating quality dark rides (such as their popluar Ghost-Blaster series), most indoor adventures off Disney property didn't seek to go beyond random collections of haunted house "scare" gags. But, back in the 60's and 70's, a wonderful park near San Jose, California, operated the finest non-Disney dark ride on the planet. 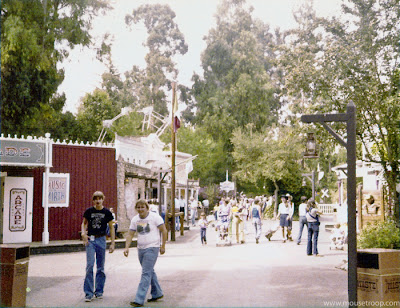 The park was Frontier Village, a charming western-themed family park in a beautiful woodsy setting. Along with live stunt shows and a collection of cleverly-themed classic thrill rides, the park featured a Stagecoach, a mule excursion, canoes and an electric "runaway" train. 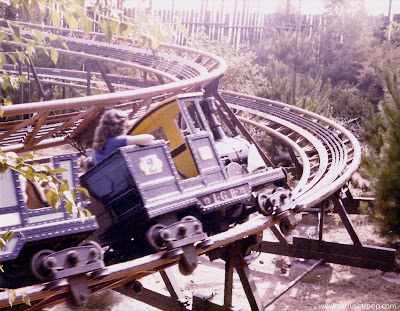 But the very best ride at Frontier Village was the Lost Dutchman Mine, a wonderfully scary (but not too scary) journey into a cursed gold mine guarded by the ghost of a doomed miner. 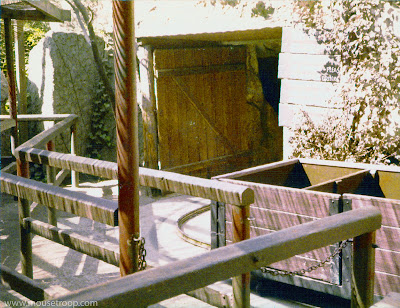 The little mine cars wound their way into the darkness, ignoring ghostly warning voices. Beams holding up the mine tunnels cracked and swayed over riders' heads. Rats threatened to jump aboard. And, among the glowing stalactites and subterranean pools, the ghost of the old miner would pop up to threaten all trespassers. After encountering a giant psychedelic snake, falling rocks and a deadly underground whirlpool, riders faced the miner one last time as he pressed down on a dynamite plunger, triggering the ride's explosive crash-door finale. 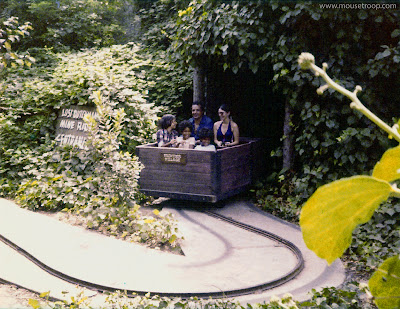 The Lost Dutchman Mine was a perfect dark ride. Well-paced and full of imaginative low-tech effects, it provided a true sense of adventure far beyond any standard non-Disney indoor attraction.

My creepiest ride through the mine happened on one visit when -- just as the vehicle entered the building -- a large and very real garden spider dropped onto my upper arm. I had just enough time to see it before being engulfed by the ride's darkness. I spend the next two minutes frantically brushing myself off and flailing my arms around like a lunatic.

The Lost Dutchman Mine, along with the rest of Frontier Village, closed in 1980. It is greatly missed.
Posted by Rich T. at 12:12 AM