A Disney Nut Reviews The Hobbit 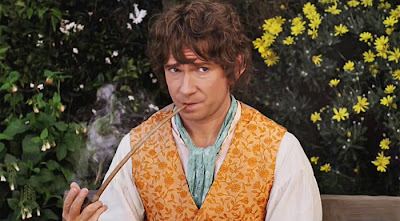 I'll get straight to the point: if you loved Peter Jackson's Lord of the Rings films, you'll love The Hobbit: An Unexpected Journey. If you didn't like the former, you won't like the latter -- because,  above all else, Jackson has crafted this new film to be an exact stylistic match to the trilogy in dialogue, design, music, pacing, tone and even the gore-level. 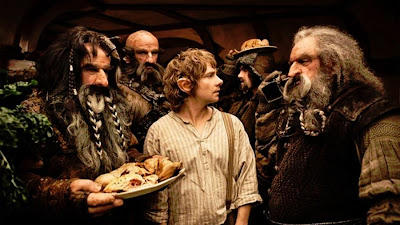 In other words, Jackson has taken J.R.R. Tolkien's charming, amazing children's novel prelude to his later epic Rings saga and -- much as he did with the trilogy films -- turned it into a huge, sprawling action movie full of visual wonderment. Rather than skew the film towards the younger audience the book was written for, Jackson has made a movie for older fans of the Rings films.

Personally, I loved the heck out of this movie -- all nearly-three-hours of it. Is it perfect? No. Does it seem a bit padded-out to make it merely the first third of a new trilogy? A bit. Is it full of enough magic, heart, great acting and jaw-dropping spectacle to make it worth seeing? Absolutely -- unless, as mentioned above -- you didn't like The Lord of the Rings. 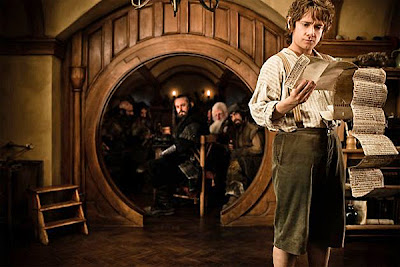 The Hobbit takes place sixty years before the Rings trilogy, and follows mild-mannered Bilbo Baggins as he leaves the comforts of home to join a company of dwarves setting out to reclaim their lost riches and homeland from an evil dragon. Since most film-goers will come to this film after seeing The Lord of the Rings, Peter Jackson takes every opportunity to foreshadow future events and spin a delightful web of connections and consistency between this movie and the others.

My opinion is one of a Disney nut, a fantasy film lover and a casual Tolkien fan. I read The Hobbit and The Lord of the Rings once, long ago. I loved Peter Jackson's Rings movies; there were elements about them that irked me, but I doubt anyone could have crafted a more successful movie series from the source novels. I trust Jackson enough to go along with his decisions in changing, rearranging and re-interpreting his subject matter; even when the film maker's choices puzzle me, they usually work out wonderfully in the final product.

So...how does one stretch the first part of a relatively short novel into a three-hour film that is only the first part of a trilogy? In Peter Jackson's case, the answer is to include everything that occurred off-stage in the book, and to pump up every action sequence into a wild theme park ride experience. For the most part, this works well. Although I enjoyed the film most when it stuck to the book's narrative, most of the additions are cinematically brilliant. I loved the opening sequence in which we get to see the dwarves' kingdom the day it was attacked by the Smaug the Dragon. Not only is it a sequence of amazing spectacle, beauty and terror, but it is vitally important in establishing our sympathies for the dwarves' plight. When we later encounter them as homeless vagabonds, it's heartbreaking to witness how far they've fallen.

No amount of clever story structure, however, could save the film if the actors didn't turn these fantasy folk into likable heroes we can root for, and once again Middle Earth shines with brilliant casting. 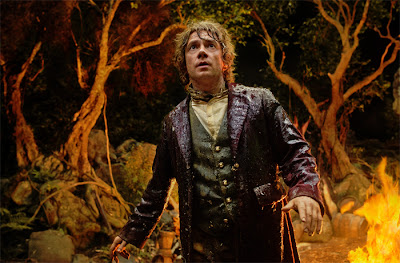 Martin Freeman's portayal of reluctant hero Bilbo is so perfect and believable, it's difficult to imagine anyone else in the role. Ian McKellan's return as wizard Gandalf is great fun, particularly since this first part of The Hobbit gives the character much more room for humor and whimsy. Richard Armitage brings a great combination of bitterness and resolve to dwarf leader Thorin Oakenshield, and Andy Serkis (assisted by the film's animators) once again brings the awful, pitiable Gollum to life with a vividness that inspires both revulsion and compassion.

On that note, the famous "Riddles in the Dark" scene between Bilbo and Gollum is worth the price of admission. Wonderfully acted and staged, it'll send shivers down your spine. And the big moment where Bilbo makes the pivotal decision which holds the message of the entire Rings saga is just....heartbreaking and perfect.

As anyone familiar with The Hobbit's plot knows, the most problematic aspect of dramatizing it lies in the portrayal of the thirteen dwarves Bilbo accompanies. Although Jackson and company have given each and every one of them a unique look and personality, many critics have griped that most of them are indistinguishable except for their beard styles. It's untrue, but understandable.

Having seen the film once, and not having memorized the publicity photos, I can offhand name and identify (besides leader Thorin) Balin, Dwalin, Bombur, Gloin, Bofur and Dori. That's seven dwarves I can remember after one viewing (appropriate for a Disney fan) and I'm sure I'll know them all after watching a second time. But that's perfectly all right with me, because even if not all the dwarves leap immediately off the screen as memorable personalities (and we've still got two films in which to get to know them), the whole group often functions as one entity in the movie; this film has no shortage of scenes in which dwarves charge into battle or tumble down slopes as one big shouting, cursing mass of arms, legs, axes and beards. And, in the context of this tale, that works just fine. You won't get to know all of the gang well, but you'll know enough about their cause to care what happens to them.

The creature animation in The Hobbit is, of course, wonderful. Unlike the Rings trilogy, this film -- in keeping with the novel's lighter tone -- treats us to animated trolls and goblins who actually speak and have vivid, morbidly humorous personalities. As grotesque as they appear, the three trolls (who attempt to feast on the dwarves) and the wonderfully revolting Goblin King provide some of the film's most purely magical, entertaining moments.

One particular point likely to divide viewer opinion lies in the outrageousness of the many action sequences, which really stretch credibility to the breaking point. They're all beautifully realized and a wonder to behold, but --- seriously, these dwarves survive so many plummets, avalanches and collapsing bridges -- without suffering so much as a twisted ankle -- that you'll wonder if they're made of titanium. It gets downright cartoonish, and I found myself rolling my eyes a couple of times...only to be pulled right back into the action a few seconds later. As ridiculous as the chases get (and I haven't even mentioned the bunny sleigh), it's all spectacularly entertaining.

Looking back at the film as a whole, I must say it works amazingly well. I'm particularly impressed with the final forty minutes, which build up to a thrilling, brilliantly staged and emotionally satisfying conclusion for this episode. Even though this is merely part one, you will not feel cheated or left hanging at the film's end.

I had my doubts that J.R.R. Tolkien's The Hobbit could be sufficiently stretched over three films. Having seen Unexpected Journey, however -- and confident that Jackson will take the time and care to do justice to the upcoming scenes with Smaug the dragon --

...I think this is going to be another outstanding trilogy.

Closing Notes: I saw The Hobbit: An Unexpected Journey in standard 24 frames-per-second non-3D. In this format, it matches the visual look and feel of Jackson's Rings trilogy perfectly. If I get an opportunity to view it in the somewhat controversial 48 fPs 3D format, I'll provide an update to this review.

As a guide for parents, I'd again like to point out that, although it's based on a children's novel, this is in no way, shape or form a children's film. The violence/gore level is about the same as that seen in the final Rings film, The Return of the King. In other words, there are beheadings, slashings and severed limbs galore, though not a lot of on-screen bloodshed. I wouldn't recommend it for children under ten.