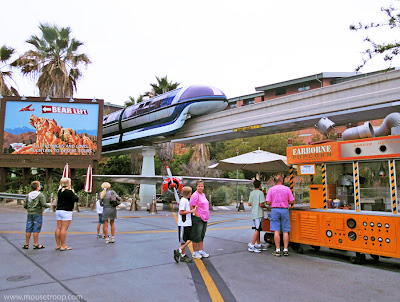 It's a busy morning at Disney California Adventure, and we're enjoying a stroll through the little backwater airstrip of Condor Flats. There's a faint rumbling. In a flash, Monorail Blue (Mandy) zips in and out of sight -- gone in a blink. You can almost hear the futuristic train saying, "'Scuse me -- pretend I'm not here -- Sorry!"

The clash of themes isn't a bad thing; it's just part of Disneyland Resort's unique character as the world's most amazing concentration of creativity in a small space.
Sometimes you have completely coherent zones like Cars Land and New Orleans Square...and sometimes you have a monorail zipping past Alice in Wonderland, a steam train, real-world Harbor Blvd., 1930's Hollywood and Condor Flats -- right before it burrows through the Grand Californian and stops in Downtown Disney near the pyramid entry to Rainforest Cafe.

Walt Disney World's Monorail passes through Epcot's Future World because it was designed that way from the beginning. Disneyland's Monorail crosses Condor Flats because it has to. Completely different atmospheres and experiences spring from that acreage-based distinction between the resorts. I love both results.
Posted by Rich T. at 12:35 AM