Review: Toy Story: Smash It! for iPhone and Android 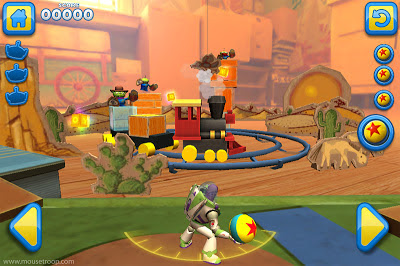 In another bid to prove they're serious about gaming, Disney has released Toy Story: Smash It!, a polished, enjoyable mobile game that's easy to play but challenging to complete. 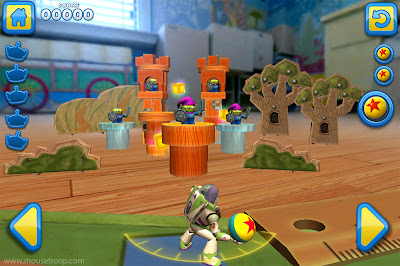 Throughout a series of playful scenarios, your mission (as Buzz) is to knock every Little Green Man to the floor with a limited number of projectiles. The aliens shield themselves nimbly, so you need to hit the platforms beneath them. In the first two worlds (Space and Old West), knocking the aliens down is easy, while doing it just right with one well-placed shot (necessary for earning stars to unlock later levels) can be challenging. Once you hit the third chapter (Fairy tales), however, it becomes increasingly difficult to unseat 'em all before running out of ammo. The ability to run Buzz around the playfield's perimeter aids in finding the best angles.
Although at first glance TTSI looks like a targeting game, aiming is the least challenging aspect of gameplay; a targeting reticule appears as you touch the screen and shows you precisely where your shot will hit; you don't have to take distance or gravity into consideration at all. Although moving obstacles often add a timing element into your shots, you'll quickly realize that Toy Story: Smash It! is more of a puzzle game; you need to figure out which blocks to hit, and in which order, to get a top score. You'll often need to set off a fun, Rube Goldberg-like chain reaction to achieve your goal.
Although most players sending reviews to the App Store are--understandably--comparing the game to Angry Birds, it's actually much more reminiscent of an earlier, Steven Spielberg-developed Wii game called Boom Blox. The simulated physics of the shattering, toppling blocks and explosive effects (what is Andy doing with little boxes of dynamite in his room?!?) are believable and (mostly) logical. 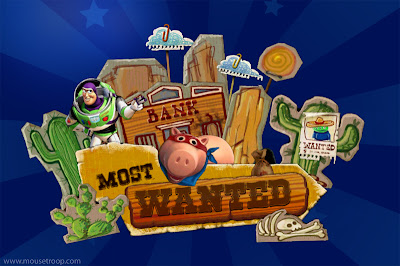 The game's presentation is top-notch with crisp graphics, smooth animation and fun voice samples. The pop-up book style of the Chapter Intros adds a touch of Midway Mania flair.

I have a few complaints: The level titles do not appear in the select menu, which makes returning to a favorite level a hit-or-miss experience. The props Buzz traverses are annoyingly wayyyy out of scale. Finally, the same pleasant-but-bland light jazz track plays in every world, which is disappointing.

Overall, though, Toy Story Smash It! is well worth the 99 cent asking price. It's not the most exciting or addictive mobile game I've ever played, but it succeeds as an enjoyable puzzler set inside a very well-produced recreation of the Toy Story world. It's definitely worth checking out.
Posted by Rich T. at 12:01 AM