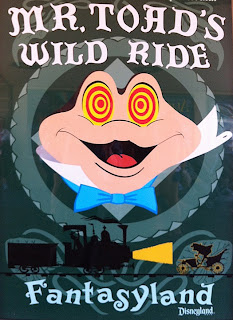 When most people think of Disneyland's Fantasyland, they think of Sleeping Beauty Castle, Teacups and Dumbo. Plunging into hell after being killed by an oncoming train probably doesn't enter their minds. To a true fan, however, no trip to Disneyland is complete without a spin through Fantasyland's weirdest attraction, Mr. Toad's Wild Ride. If you've never rampaged through moonlit London aboard one of Toad's out-of-control motorcars, be sure to check out this gem on your next trip. Like all of the classic Disneyland dark rides, it keeps getting tweaked and improved. I love the recently enhanced "crashing through the fireplace" effects.

Disney's got an animated Mr. Toad's Wild Ride film in production, and they're boasting it's based on the ride. The odd thing is, the ride's already based on Disney's own film,  "The Adventures of Ichabod and Mr. Toad," which is based on Kenneth Grahame's classic novel, "The Wind in the Willows."