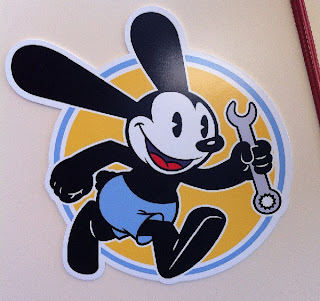 The shop sells Oswald plush figures, which look awesome -- and are reasonably priced to boot! I hope the good folks in charge of merchandising realize what a gem they have here; nothing broadcasts a cool, fun, nostalgic vibe like Oswald, because we're not used to seeing him. I'd love to buy a poster of the above logo, and it seems automobile decals would be a natural.

Walt Disney created Mickey Mouse after realizing that, contractually, he did not own Oswald. The Walt Disney company recently acquired the rights to the character, and it's a pleasure to see his happy image become such an important part of DCA's rebirth. Coupled with his starring role in the hit videogame Epic Mickey (with a sequel due this Holiday season), Oswald's becoming a well-liked character to Disney fans of all ages. The once-forgotten rabbit has found his audience at last.
Posted by Rich T. at 6:58 PM