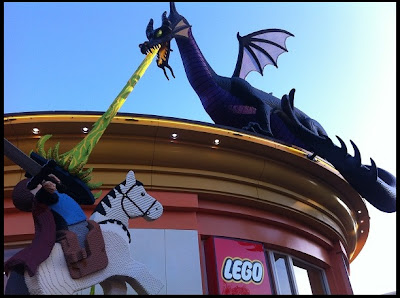 The humongous new Maleficent dragon atop the remodeled Lego store is the best thing that's ever landed in Downtown Disney...besides chocolate-covered marshmallows on a stick. The fact that it's made out of Lego just makes the creature more wonderful. Downtown Disney's a great place, but a few more jaw-dropping sights like this would add extra fun to the mix.

It's hard to believe the shop originally opened with nothing up there. I'd like to shake the hand of the person in charge of the remodel -- the visionary who gazed up at the plain rooftop and said, "Something's missing...Aha!"

Disney and Lego -- what a perfect pairing! It's nice to know that, even though the building-brick company operates a competing theme park a bit farther south, the two giants can cooperate to create something as cool as this.