Into the Witch's Lair 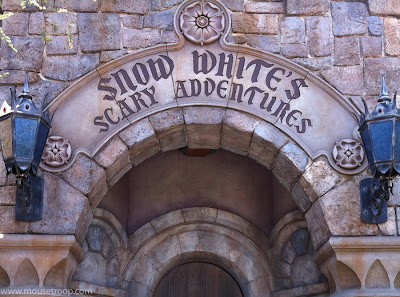 When the Imagineers remodeled Fantasyland in the early 1980's, they had a clear goal in mind for the new entry to Snow White's Scary Adventures: they made it quite clear to all guests that the ride was not about cheeping birdies and gooseberry pie. 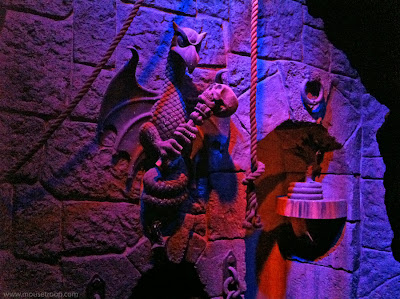 The queue immediately plunges you into the dark depths of the Evil Queen's dungeon at the exact moment she's planning Snow's demise. Her words and evil laughter echo from just around a corner through that stone arch. One gets the creepy feeling she could lunge out at any second. Love that gargoyle; he looks like he's planning to clobber anyone who gets too close. 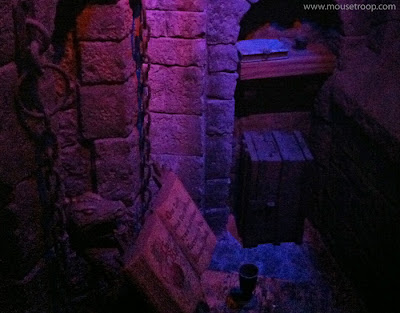 Below, you can glimpse the book containing the spell for Sleeping Death. Judging by all the strollers parked outside, many parents still think this is a swell ride for toddlers. Go figure.

I was saddened when Walt Disney World's Magic Kingdom recently closed its Snow White dark ride. I rode the terrific, original really scary version of that one (two solid minutes of the witch trying to kill riders) before it was remodeled. Florida fans are in for a real treat, however, when the Seven Dwarfs Mine Car roller coaster opens in 2014!
Posted by Rich T. at 12:01 AM