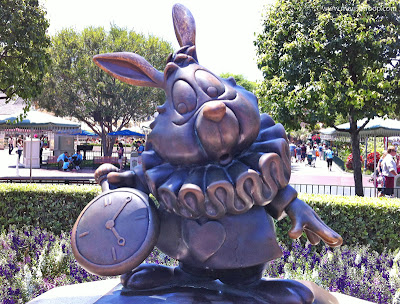 While relaxing on this summer Sunday, let's look at one Disney character who never, ever relaxes: the harried and perpetually stressed-out White Rabbit. For this statue in Disneyland's Central Plaza hub, the sculptor really captured W.R.'s spirit perfectly; he looks like he could bolt away at any second -- if he weren't already bolted down.

There are four other White Rabbit figures in Disneyland: a life-size statue at the Alice dark ride's loading zone, and three inside the ride itself, including the one who gets an exploding Unbirthday cake in the face.

What a great and under-appreciated character!
Posted by Rich T. at 12:03 AM