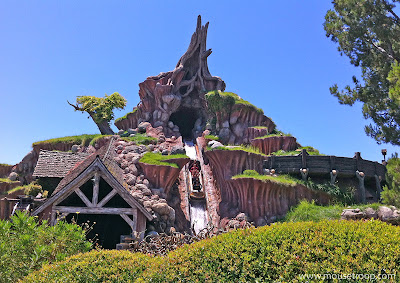 Splash Mountain, by far one of Imagineering's most popular creations, has been thrilling U.S. guests ever since the ride opened at Disneyland in 1989 and Walt Disney World in 1992. The two versions offer similar experiences, but each has its own location-specific exterior, as well as different seating layouts and music arrangements. They're both great, but is either one better than the other?

I love the green, beautiful, nearly-Tolkien look of Disneyland's mountain. I enjoy both the jazzy style of Disneyland's music score and the country/bluegrass version at Walt Disney World. The hitchhiking alligator at DL is wonderful, but so is the animated silhouette chase at WDW. Disneyland's final drop is scarier.

BUT...although both could use some TLC in the audioanimatronics department, this Disneyland native must admit that -- when both mountains are operating at their best -- Walt Disney World's Splash Mountain wins this one. Its story is easier to follow, it has more special effects, and the side-by-side seating is more comfortable than DL's single-file bench. The Florida ride also splashes guests without overdoing it; ever since the log makeover a few years ago, Disneyland's Splash Mountain soaks people.

California has the epic-length Pirates ride, and Florida has the more elaborate Splash Mtn. What do you think? If you've ridden both Splash Mountains, which do you prefer?
Posted by Rich T. at 11:10 AM