Review: The Mouse Goes Mobile in Where's My Mickey? 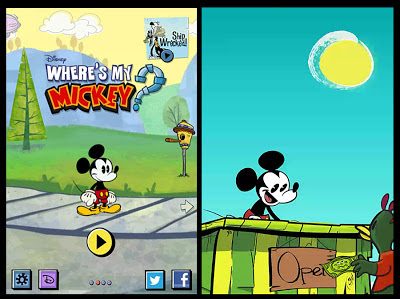 This could be a case where I enjoy a game more than the TV source it's based on. Aside from the fresh, fun art style, I'm not a big fan of what I've seen so far of the new Mickey Mouse cartoons coming to the Disney Channel. I'm hoping future installments are more charming and less mean-spirited, because I love the new visual approach. 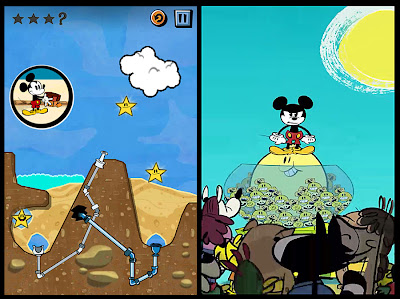 Those snappy character designs and art direction have been incorporated into the mostly-excellent mobile game Where's My Mickey? now available for iPhone and Android. Despite one very inappropriate, unfunny, nasty and out-of-character sight gag in one of the game's chapters (more on that later), this is a fun, clever upgrade of the popular Where's My Water? series--which was top-notch to begin with 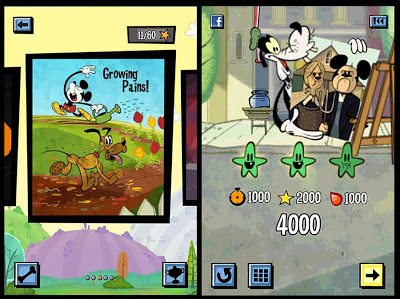 If you've ever played the Swampy Alligator or Perry Platypus editions, you know what to expect as far as gameplay: Your job is to deliver water to Mickey (or paint to Goofy) by drawing paths in the ground in a series of physics puzzles which get more clever and devious as you progress.

Where's My Mickey? improves the franchise by turning each multi-puzzle game world into a self-contained animated cartoon where your success advances the story toward its conclusion. Each world begins with a fully animated intro sequence that sets up the situation (in the first section, Mickey needs water to make lemonade at the beach). The story smoothly segues into the puzzle, and when you solve the problem you return to the cartoon, where you're rewarded with a sight gag. Finishing the final puzzle triggers the cartoon's ending animation. It's all done incredibly smoothly, keeping the living-cartoon atmosphere believable throughout the game.

Priced at 99 cents, the game includes three Mickey cartoons to play through, with two Goofy episodes available to purchase for another 99 cents. All purchased levels are available from the beginning, so you can alternate between the cartoon worlds without having to complete them in succession.

Where's My Mickey? is a terrific, polished, well-designed entry in the Where's My Water series. It's full of great little visual surprises and some good chuckles...

...and marred by a single stupid, thoughtless gag involving Goofy that pretty much sums up what I dislike about the tone of the new Disney Channel Mickey toons. Someone involved with this project apparently thought it was funny to show Goofy violently shoving an elderly lady out of his way (we then hear her scream and crash off-screen). That's about as cheap, lousy, brain-dead, mean-spirited and unimaginative as a gag can get.

Whether or not you think abuse of the elderly is appropriate for a Disney game, you have to admit that even a three-year-old could point out that such an action is completely out of character for Goofy.

If you do, however, find it offensive, please let Disney know how you feel.

Okay, I'm off my soapbox. That one bit of unnecessary nastiness aside, the other elements of the Goofy levels are quite clever and feature the best puzzle ending gags.

Overall, Where's My Mickey? is a terrific game that contains one unfortunate lapse of good judgement. It's 99% great, and well worth checking out.

In future updates, however, I hope they leave the violence-against-the-elderly gags in the trash.
Posted by Rich T. at 12:16 AM