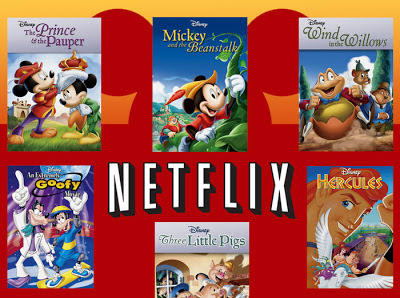 The Wind in the Willows, Paul Bunyan, Hercules, a lot of classic Mickey Mouse and rarely-seen gems like The Saga of Windwagon Smith are now available for digital streaming.

Today is a very good day to be a Disney fan with a Netflix account. The streaming service just added a boatload of fantastic animation, including films that haven't been widely available for ages!

Let's take a look at the lineup:

As far as animated features go, Hercules has arrived, along with An Extremely Goofy Movie (one of Disney's better direct-to-video films: smart, funny and well worth seeing).

For classic animation fans, the really big news is the arrival of a five-volume animation collection Disney's put together, each with a theme. Take a look at what's included here, and feel free to completely geek out:

Disney Animation Vol. 3: The Prince and the Pauper

Disney Animation Vol. 4: The Tortoise and the Hare

The Tortoise and the Hare
Babes in the Woods
The Saga of Windwagon Smith (a rarely-seen gem!)
Goddess of Spring
Toby Tortoise Returns
Paul Bunyan

Disney Animation Vol. 5: The Wind in the Willows

The Wind in the Willows (aka The Adventures of Mr. Toad)
The Ugly Duckling
The Robber Kitten
The Grasshopper and the Ants
The Wise Little Hen (Donald Duck's first appearance!)
The Golden touch (directed by Walt Disney!)

What a great, great gathering of classic animation in these five volumes!

The Fox and the Hound 2 (I'd blocked this one out of my memory)
Honey, We Shrunk Ourselves (ditto)
The Jungle Book: Mowgli's Story (a video sequel to the excellent Disney live-action Jungle Book. Haven't seen this one yet).

School House Rock: Earth. Not nearly as good as math or grammar, but it's a start.

For a full list of all classic Disney that's available for streaming, please check out our Disney on Netflix page.
Posted by Rich T. at 1:55 PM