Roger Rabbit Gets Framed on Netflix: A Review of a Classic

One of the best fantasy films of all time has just become incredibly easy to revisit. 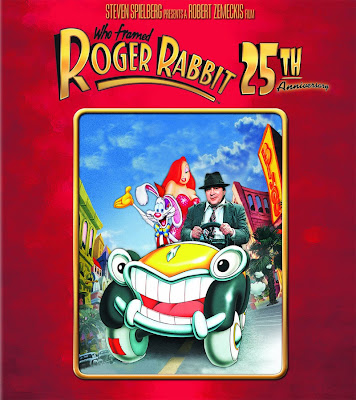 Many thanks to reader Josie Becker for a timely email alerting me to the awesome fact that Who Framed Roger Rabbit has arrived on Netflix for instant streaming! 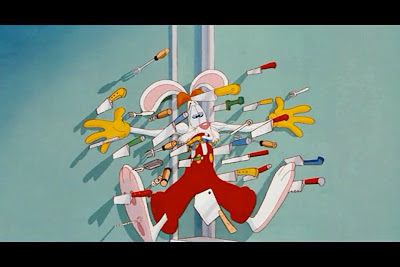 This is the fantastical murder mystery that made animation "cool" again in the eye of the general movie-going public. An incredible "what-if" alternate Hollywood history, it depicts a world where cartoon characters exist as a separate species hired for their ability to make humans laugh--while receiving no respect, gratitude or fair pay in return. 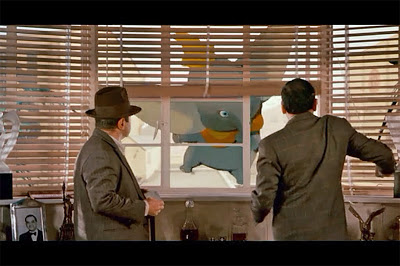 How many of you saw Roger Rabbit for the first time in a theater on opening day? For the generation that grew up with The Bugs Bunny/Road Runner Show on Saturday mornings and Walt Disney's Wonderful World of Color on Sunday nights, this film became a communal celebration of everything we loved about the classic animation that had given us so much laughter. Even in my average-sized town, the theater exploded with cheers, guffaws and applause like I hadn't heard since the debut of Star Wars.

Who Framed Roger Rabbit bursts with clever ideas and terrific performances--both from the animators and the actors. Bob Hoskins deserved an Oscar for his portrayal of gumshoe Eddie Valiant: He threw himself 100% into the role and made the entire world believable.
Many of today's viewers may not realize that the animation is completely hand-drawn, using the traditional ink-and-paint on cels technique for coloring. Disney would not introduce computerized coloring until the release of The Rescuers Down Under two years later.
Are there any flaws? Sure: the murder-mystery half of the plot hits a bit of a pacing pothole toward the end of the second act--mainly due to a major sequence of events being cut from the final film to trim down the running time.
But Roger Rabbit was never really about the murder, anyway. This is the story of an alcoholic detective whose life is turned around by his encounter with Roger. It's about the importance of laughter and imagination in people's lives.
And, most of all, the biggest joy of the movie lies in the simple act of settling back and watching its amazing world unfold before your eyes.
There will never be another film like Who Framed Roger Rabbit. Produced before the dawn of CGI, it was a miracle movie celebrating the joys of hand-drawn animation, with the right talent working with the right story at the precise right moment in film history. So pay another visit to the production that added the word "toon" to our language. And don't forget the Ink and Paint Club's password: "Walt sent me." 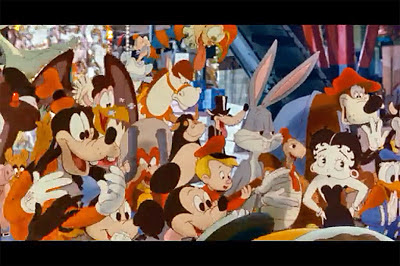 Things are never black as they are painted.
Time for you and joy to get acquainted.
Make life worthwhile.
C'mon and smile, darn ya, smile.
Posted by Rich T. at 2:28 AM