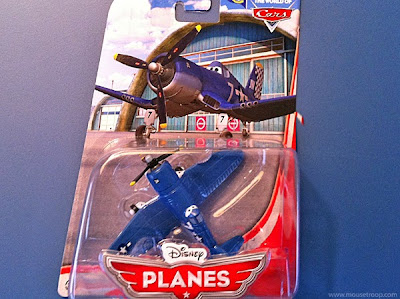 An unusual new Disney animated film is nearly upon us (the first non-Pixar feature film set in a Pixar world), and--no surprise--the Planes merchandise has landed ahead of the movie to begin the ballyhoo.

As usual for the Cars franchise, the little collectible die-cast characters are slickly packaged, and I love the backdrop for Skipper (shown above), as it looks like a ready-made Imagineering pitch for an upgrade to DCA's airstrip-themed Condor Flats. 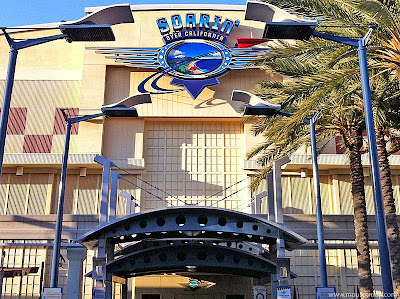 This area, of course, holds the gigantic hangar-shaped show building for Soarin', the only real reason anyone ventures into Condor Flats. This land needs another ride and a big boost in the personality department. 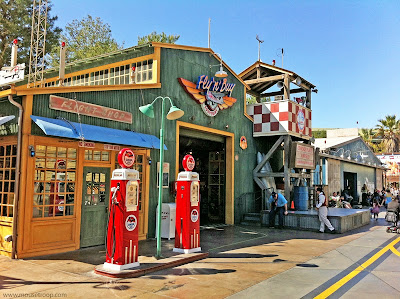 It's got an appealing theme, and I love the ramshackle airstrip buildings on the Grizzly Peak side. 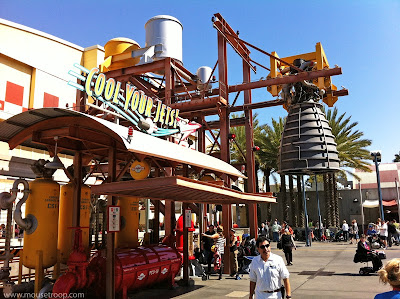 Perhaps, however, it's time to get rid of the giant rocket jet mist-blaster (which is an eyesore even when it's working) and really add some more charm (and much more shade) to the whole zone. I know I'm not the first blogger to point out that this would be a fantastic photo-op location for meeting the cast of Planes.

Any chance of the film's mythical Propwash Junction coming to life here in any form depends, I'm sure, on the movie's box office take. With or without the Planes crew, however, DCA's Condor Flats needs to become a truly beautiful and memorable destination, and not just the place you hurry through on your way to Soarin'.
Posted by Rich T. at 12:30 AM