A Portal to Wondrous, Dark Adventures 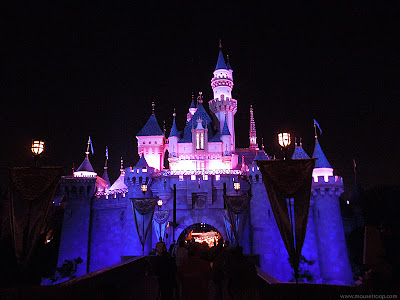 Sleeping Beauty Castle is more than a fanciful park icon; It beckons you into a land containing the best collection of classic-style dark rides on the planet. And, once upon a time (before the mid-eighties), those rides were darker and more mysterious. Today's guests experience the adventures of Snow White, Pinocchio, Peter Pan and Alice as journeys into film worlds they're well acquainted with. Mr. Toad's movie remains relatively obscure, but at least the film's available.

But the dark rides weren't always visits to familiar film worlds. Two factors originally combined to make each ride a stranger, more thrilling experience, particularly for children. Sure, there was the massive Fantasyland makeover in 1983, but most of it revolves around the fact that Disney animation was not always something you could view anytime you wanted.

Anyone who grew up in the 1950's, 60's or 70's might remember the particularly strong sense of otherworldliness Fantasyland held. Because...

In the pre-home-video days, more park guests knew the Disney versions of Alice, Snow White, Peter Pan, and Mr. Toad from their Fantasyland dark rides than from the films themselves.

Plus, the original, pre-1983 dark rides were not concerned with faithfully recreating the stories (despite Disneyland publicity claiming otherwise). They were much more surreal, impressionistic creations, intended to thrill, surprise and--in the case of small children--frighten the living daylights out of. The same can be said of Walt Disney World's original 1971 versions of Snow White and Mr. Toad.

Most folks boarding Fantasyland mine carts and caterpillars had never seen (or hadn't seen in years) the Disney films of the stories they were being whisked into, and the rides stood on their own as mysterious, strange worlds where witches lunged out of the darkness, rooms turned upside down and a bleary-eyed signalman stared as you drove your little motor car straight into a railroad tunnel of doom. And your clothes glowed in the dark!

Today's Fantasyland welcomes you to a land of now-familiar tales. Yesterday's Fantasyland was a colorful realm of familiar characters from mysterious animated wonders locked away in the Disney vault. No one's kids were watching Peter Pan on a DVD in the family mini-van on I-5 on the way to the park.

The dark rides remain incredibly popular today. Some ride concepts remain solid enough to entertain throughout massive cultural changes. And evil witches in the dark will always be scary.
Posted by Rich T. at 6:53 AM