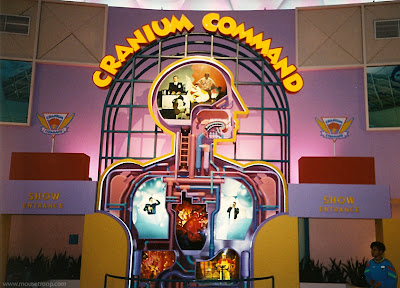 1993 marked my Disneyland-lovin' west coast family's first trip to Walt Disney World. Like any good Disney fans back then, we'd read our Birnbaum and Unofficial Guide. We had a mere four full days to see as much as possible.

When our touring brought us to the Wonders of Life Pavilion, I expected Body Wars to be my favorite attraction there. I enjoyed the simulator, and nearly passed up the pavilion's second-biggest star, Cranium Command -- then I remembered a friend back home had recommended it.

I'm forever grateful for my friend's advice; Cranium Command turned out to be the single best, funniest and most ingenious show I've ever seen in any Disney park, and one of my top three favorite attractions in all of Walt Disney World. 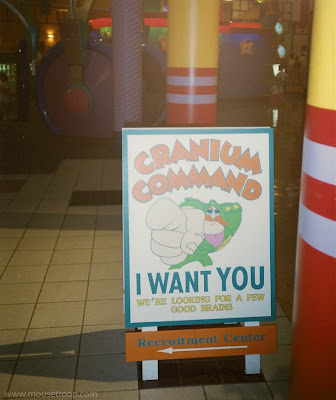 The hilarious first-act "induction" movie knocked me out with its great character animation and Monty-Python edge as it introduced rookie brain pilot Buzzy and the non-stop blustery shouting of General Knowledge. The General truly made this show awesome; I can't think of any other Disney attraction in which a character loudly calls the audience "meatheads" and "miserable toads." He, of course, also shouted the immortal words, "Where do you think you are, Disney World?!?"

This fast-paced masterpiece intro was directed by Gary Trousdale and Kirk Wise, who became superstar animation directors with their very next film, Beauty and the Beast.

The General's banter continued as guests entered the main theater ("Are you waiting for your mamas to seat you?!?") It didn't take long for guests to realize the theater represented the inside of a boy's head, with forward screens functioning as the eyes. Cranium Commando Buzzy, now in audioanimatronic form, tried to guide his assigned human through a  disastrous day while managing and directing the heart, stomach, left/right brain, adrenal gland and bladder, played by 80's-90's era  celebrities such as  George Wendt, Jon Lovitz, Charles Grodin, Bobcat Goldthwait and Dana Carvey, all providing frantic input via video screens.

Everything worked, and the show flew by with the intensity of a great ride. The comedy was brilliant, and both stories -- Buzzy's quest to be a good brain pilot and the human boy's extremely bad day at school -- all came together (via surprisingly kind advice from General Knowledge) for a completely satisfying, uplifting conclusion. I saw the show a half-dozen times during our trip, and the audience cheered loudly at the conclusion each time.

Essentially, Cranium Command presented an entire feature film's worth of plot, characterization and comedy within its 17 minute running time, staged in a unique and ingenious theater. It's a pity the show couldn't remain in Epcot forever. The one element that wouldn't age well  -- the celebrity cameos -- could have easily been swapped out with new guest stars. The story itself was timeless.

I vote for Cranium Command as the best non-ride Disney park attraction of all time. Any other Buzzy & Knowledge fans out there?