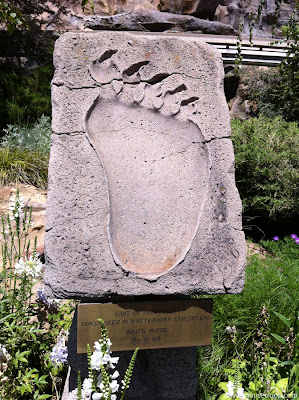 While strolling around the perimeter of Disneyland's Matterhorn, you're bound to come across this footprint casting that appeared in 1978 as the Matterhorn re-opened after a lengthy refurbishment.

The remodeling turned the mountain's interior (which previously had been one big open space with minimally-decorated beams, stairs and framework) into a maze of artificial ice caverns. The original single bobsleds were redesigned and coupled into two-car trains.

Best of all, the Abominable Snowman (unofficially dubbed "Harold") moved in, turning the unique roller coaster into a full-fledged Fantasyland adventure.

The footprint, with it's cartoon-like stylization, perfectly captures the spirit of the mountain's sole inhabitant (there are three abominable snowman figures on the ride, but they all represent the same guy pursuing you down the mountain). Unlike the Yeti in Animal Kingdom, which was designed to appear as much like a realistic beast as possible, Harold looks like a monster from a storybook -- a really good, scary storybook.

If fact, he'd look right at home stomping around Fantasyland looking fierce and reluctantly signing autographs. Come to think of it, why hasn't he ever appeared as a walk-around character?
Posted by Rich T. at 12:10 AM