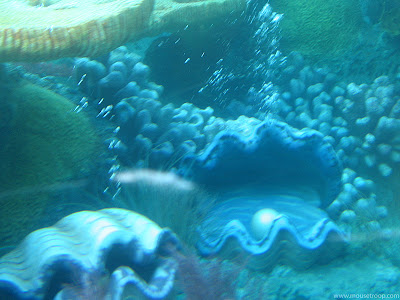 Guests descend a steep metal staircase to take a seat below water level in one of Disneyland's famous submarines to view the aquatic world through a porthole. As the cabin lights dim, the vehicle leaves the dock, cruising smoothly through the spectacular flora and fauna of the outdoor lagoon. The sights here are all solid, physical fabrications -- basic but effective. This section of the journey plays out very much like the start of the original 1959 ride, with a few Finding Nemo touches blended in to ease the transition from naturalistic sealife to fantasy world.

The subs pass through a waterfall into the indoor section of the ride, and everything quickly gets more colorful, more story-driven and more animated. Nemo has swum off on an adventure, and you give chase with Marlin and Dory through encounters with other characters from the Pixar film, including sea turtles, sharks, jellyfish, scary angler fish and whales.

Some fans bemoan the change, claiming the original ride was much better. I say it's all a matter of taste. The old version was a classic 1950's/1960's-style Disney adventure with fairly impressive mechanical effects, including mermaids, toppling stone columns and a lovable sea serpent. You could see the strings and rods, but it was still fun. The new ride--once inside the show building--relies heavily on high-def animation, trading huge sets for a more intimate, character-driven experience. It's funny, colorful and spectacular. As cute as the whale finale is, however, I think if they brought back the old sea serpent near the ending (not just the serpent tribute the Imagineers included in the rockwork), both camps would be satisfied.

A classic reborn for a new generation, the Finding Nemo Submarine Voyage blends old and new into a fun, beautiful adventure. It's not the most thrilling ride in the park, but the subs themselves make the experience unique. Well worth checking out if the wait is twenty minutes or less.

WARNINGS: You will be spending about fifteen minutes--possibly longer--sitting in a tightly-packed, dark chamber, though air jets beneath each porthole help keep it from feeling claustrophobic. One particular scene may frighten small children.