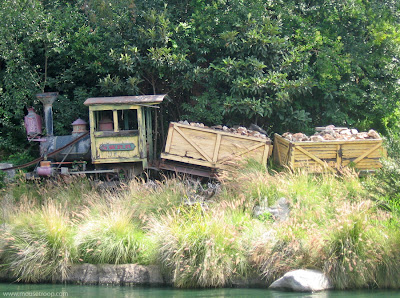 In 2007, when this shot was taken, a trip around Disneyland's Rivers of America included a view of this wonderful old Mine Train from the park's early years.

As a tribute to the Mine Train Through Nature's Wonderland (removed to make way for Big Thunder), this beautiful old MTTNW locomotive was set up  as though wrecked in a rockslide along one of the original ride's stretches of railroad track.

Little mechanized marmots (a species of ground squirrel) would pop up among the rocks in the mine cars, referencing a gag from the old ride.

The mine train tribute was removed during the recent refurbishment of Rivers of America, as new scenery was put in place to truly turn the river into a tour of America's greatest waterways.
Posted by Rich T. at 4:40 AM