Lilo and Kuzco Arrive on Netflix 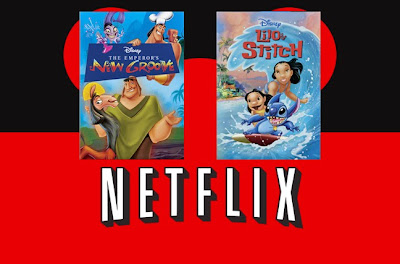 The Netflix library of Disney classics just got a great dose of later-era comedy. Lilo and Stitch and The Emperor's New Groove have arrived for instant streaming.

Two of the best-received films of Disney's post-Lion King hand-drawn lineup, they certainly seem to belong together in one release. Both are extremely funny, sharply directed, and much-loved by fans of all ages. The Emperor's New Groove is one of the most-quotable films Disney's ever released. Lilo and Stitch, despite the company's later over-exposure of the little alien, remains an incredibly original and imaginative story (its directors would go on to create the best Dreamworks film ever: How to Train Your Dragon).

It's good to see these two added to the streaming mix, they're the perfect films to watch on a brisk nearly-autumn evening!
Posted by Rich T. at 8:13 PM