Which Line Didn't Make it to Wonderland? 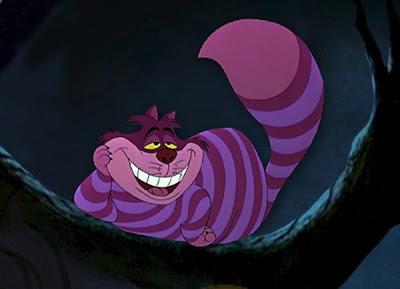 Disney's animated Alice in Wonderland isn't perfect, but its unique and unforgettable style makes it my favorite Disney film (or, at least tied for first place with Peter Pan).

The movie's sharp, off-the-wall lyrics and dialogue are quite unlike anything in any other Disney feature. Here's a list of some gems, but can you spot the line that didn't make it into the final film? The answer sits under the next pic.

3) I never, never ever do a thing about the weather, 'cause the weather never, ever does a thing for me.

6)  How cheerfully he seems to grin, how neatly spreads his claws--and welcomes little fishes in with gently smiling jaws.

7) Follow the directions and directly you'll be directed in the right direction.

11) Don't tell the Queen what you have seen, nor say that's what we said. 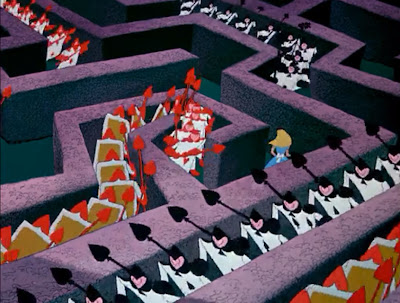 I'm sure a lot of Wonderland fans wish that a certain deleted song and its accompanying characters had made it into the final film. As seen in the bonus material on recent DVD releases (originally revealed on the laser disc), "If You'll Believe in me," a song written for a proposed Lion and Unicorn scene, was set aside when the two characters were crossed off the cast list. 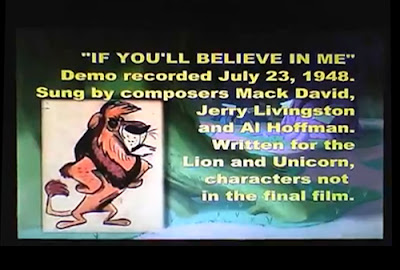 So the answer is nine. Follow this link to a fan's Youtube posting of the deleted song, which is very, very good. I hope in turns up in a future Disney "Lost Chords" album release.
Posted by Rich T. at 1:28 PM