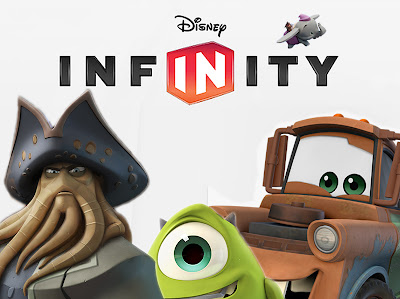 Disney Infinity will delight you, inspire you, challenge you and cheerfully empty your wallet. Its methods for coaxing you to buy more and more of its world could be considered ruthless, except for one important factor: Like a Disney park, it gives you more than your money's worth. 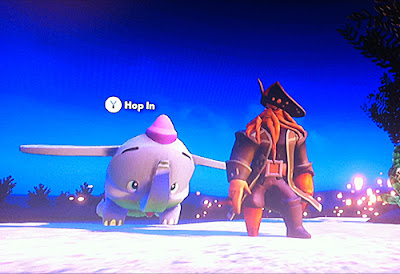 In that respect, you could easily think of Infinity, the company's toys-come-to-life-in-a-video-game juggernaut, as Disney Parks: The Home Edition. If you laid it out in theme park terms, the experience would look something like this: 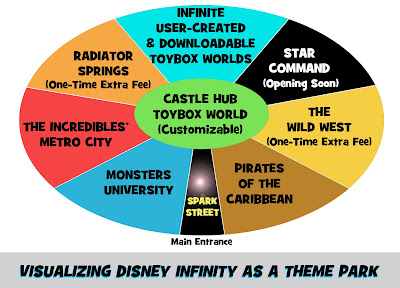 The game is stuffed with elements geared specifically toward park fans, from actual park music and vintage sound effects to an impressive Matterhorn complete with a working bobsled rail slide. Epcot fans will love the inclusion of Spaceship Earth, plus the game's introductory sequence that casts you in the role of One Little Spark of inspiration.
The clever design sends you into a vast, anything-goes "toybox" world where you can combine themes and characters in any way you wish, selecting from hundreds and hundreds of parts to build your own games with your own rules--anything from racetracks and shootouts to pinball machines, obstacle courses and soccer fields. You don't have many parts available at the start, however. To get them, you have to venture from the toybox "hub" into the Playset worlds, which are large, scripted film-specific adventures (Infinity's version of E-Ticket attractions). 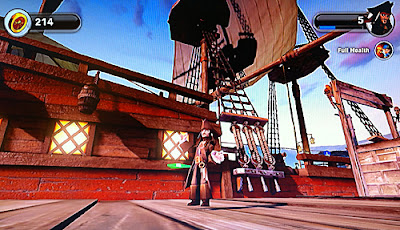 With a starter set costing about $75, Disney Infinity, like Activision's Skylanders franchise, provides a full gaming experience right out of the box, yet (like Skylanders) holds a lot of extra content which can only be accessed via the purchase of additional toy figures.
Is it a rip off? No. The add-ons are not mandatory, and nearly everything about this project is top-notch, from the astonishing things you can do within the game (even if you never buy another thing) to the nifty design and amazing high-quality of the little collectible figures. Seriously, I've seen expensive Disney Classics Collection sculptures that weren't as well-painted as these toys.
But, be warned: It's hard to resist the add-ons. Going back to the Disney park parallels, the starter set is the All-Star Resort and Paradise Pier Hotel version of an Infinity virtual vacation. If you want the Grand Floridian or Grand Californian complete with Extra Magic Hours and Reserved Show Seating, you're going to have to pay extra. 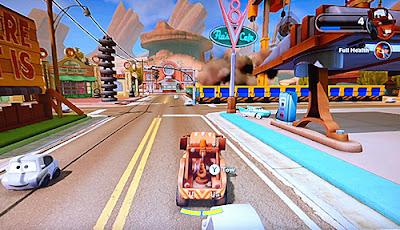 How much extra? At full retail, the Cars and Lone Ranger worlds cost about $30 each (each comes with two figures and several hours worth of gameplay unique to that world). Individual figures run about $13 each, though bundled "villains" and "sidekicks" packs can save you some money. 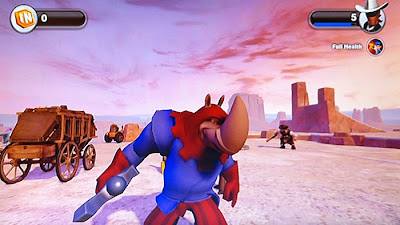 If you buy all the currently (as of this writing--there's more on the way) available figures and sets, you'll spend an approximate additional $160 dollars. So, including the starter set, the phase-one complete Infinity experience would cost about $235 dollars. 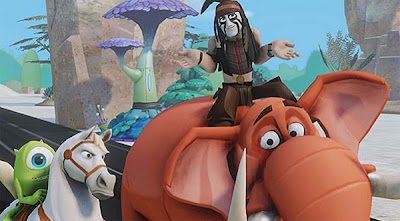 Yeah, that's a lot for a video game, even a massive one such as this, complete with figurine collection. On the other hand, I can think of an awful lot of Disney souvenirs (and non-Disney experiences) that cost a lot more and deliver a lot less.

In fact, I'd really have no major complaints at all about Infinity, except for one element: The power discs. These are little tokens that, when placed on the Infinity Base, add special vehicles, weapons or scenic elements to the game world. They're cool., They're fun. They're collectable. They come in blind, random packs of two for about $5 a pack.
This is the one spot where the game's creators have stepped over the line of reasonability, because some of the game's most-wanted effects and vehicles (such as Tulgey Wood, Rapunzel's Lantern Sky and the Flying Dumbo) are only available via the discs. So if your random pack of two doesn't have what you're looking for, too bad. Your only choices are:

1) Buy more packs and risk getting worthless duplicates.
2) Trade with friends and family.
3) Pay extra from a seller on Amazon for the particular discs you want.

Buying several blind packs and winding up with (among other things) three Stitch Blaster Guns, two Cinderella carriages and no Flying Dumbo is not fun. The discs are a great idea, but the blind packaging comes across as a mean-spirited misstep. I have a feeling many, many players will be going the Amazon route after a couple of disappointing random pack purchases. 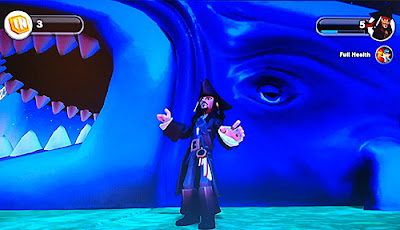 Overall, however, Disney Infinity is an amazing creation. If you're a Disney fan, there's almost no way you're not going to be delighted by its amazing world. The character animation is superb. The voice acting is top notch. The gameplay is diverse, challenging and fun. The attention to detail goes far beyond expectations. And, once you really start building and creating in the Toybox world, the possibilities become endless as you create a game experience that reflects your personal tastes. 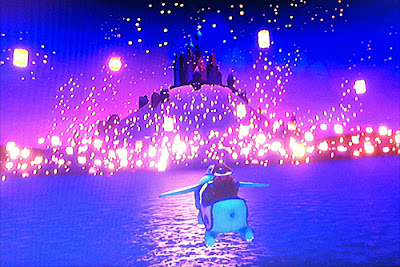 It all really does feel like a mini Disney Park vacation to access at any time in your home--except, in this case, you've already bought the souvenirs.

If only the game served Mickey Waffles and Dole Whips, the experience would be complete.

Our in-game photos were taken with an iPhone aimed at a TV. The game looks much better in person.

The full Disney Infinity experience is only available on XBox 360, Wii U (note the U) and Playstation 3. The regular Wii version offers a scaled-back (but still enjoyable) adaptation. The 3DS version is a handheld collection of mini-games bearing no resemblance to the console editions.

For more information on Disney Infinity, including some helpful tips, please see our Infinity Guide Site.