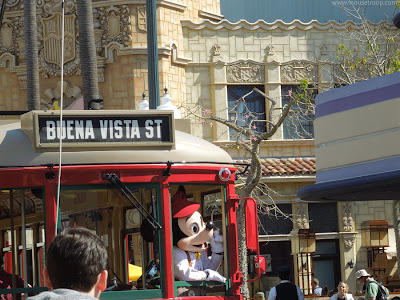 Mickey, newly arrived in Southern California, takes in the sights and sounds of Hollywood Boulevard on his way to Buena Vista Street. At least, that's his backstory in the Red Car Newsboys show at DCA.

It's refreshing to see The Mouse portrayed as an average Joe instead of a global superstar, and it's one of the many charming elements that's begun forming DCA's unique atmosphere. After the park's original 2001 grating attempts to distiniguish itself by being "edgy" and banning Disney characters from the grounds, it turned out that presenting the characters in unexpected, period-appropriate roles was a much better way to go.

Photo by Lana Whitham
Posted by Rich T. at 1:37 PM