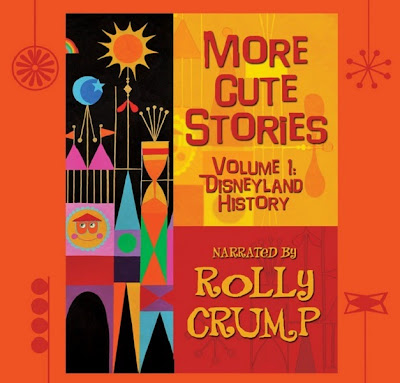 Odds are good that some of your favorite Disneyland or Walt Disney World details--whether in the form of a talking tiki, the Tomorrowland bandstand rising from the ground, the little animated figures in the popcorn carts or the Haunted Mansion's wallpaper--were designed by Rolly Crump. His autobiographical It's Kind of a Cute Story, published last year, quickly became a must-read for Imagineering fans.

Fortunately for all, Mr. Crump has many more backstage secrets to reveal, and the just-released More Cute Stories serves as a colorful, wonderfully entertaining audio sequel to his book. Whether or not you've read It's Kind of a Cute Story (and you really shouldn't miss it--It's on Kindle), More Cute Stories is a blast; It's like having Rolly Crump sitting across the table from you at the world's most awesome dinner party as he genially recalls forty-five minutes worth of fun and eye-opening Disneyland moments the company never talks about, all in good humor with a great sense of perspective.

This title has been released on iTunes and Amazon MP3 in album format instead of as an audiobook, with each chapter as a separate track. That amounts to $9.99 for about 45 minutes of Imagineering gold, spoken by one of the most brilliant artists to ever work for Walt. I've bought a lot of spoken-word LP's in the past, and find the price point reasonable--especially as a fan who's likely to listen to Imagineering anecdotes far more often than, say, a Jerry Seinfeld monologue.

Note that this Disneyland-centric album is "Volume 1." I can't wait for the next episode, and I'm hoping we'll get to hear Mr. Crump's talk about his WDW work--particularly the design of the Florida dark rides!
Posted by Rich T. at 10:34 PM