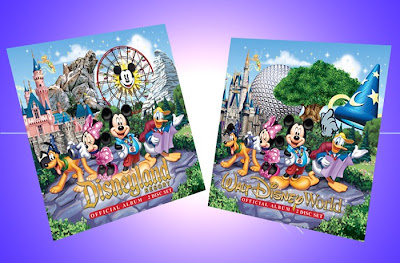 Today, for the first time ever, Disney's new Official Albums for Disneyland and Walt Disney World are available for digital download on iTunes, Amazon and Disney's own online music store.

The Good News: Most of the tracks are available for individual purchase, so great new selections from both coasts such as "Radiator Springs Racers," "Test Track," "A Suitcase and a Dream" and "Be Our Guest" can be added to fans' playlists without purchasing both entire albums ($19.99 each). This is a great plus for buyers who already own most of the tracks from previous editions of the park CDs.

The Bad News (but we knew this was coming): Longer tracks (and a couple of short ones, such as Pooh) are only available if the entire album is purchased. There's no way iTunes would offer the nearly 20-minute long Fantasyland Dark Ride Suite for $1.29, after all.

Whether you call Disneyland or Walt Disney World your "home" resort, both of these albums are terrific collections of some of the best music ever produced under the Disney banner. There's actually very little duplication between the two albums. Toy Story Midway Mania, for instance, is represented by two completely different tracks on each set.

What follows is a quick overview of the collections. I'm going to assume most of you already own most of the classic tracks. If not, you can't go wrong buying both albums in their entirety.

On that note, if you're a big park fan and don't already have the "Fantasyland Dark Ride Suite" (with music from Pinocchio's Daring Journey, Mr. Toad's Wild Ride, Peter Pan's Flight and Alice in Wonderland), you should buy the entire Disneyland album; It really is a must-have, epic-length track. And if you don't yet have the score for "Spaceship Earth," you certainly should consider buying the entire Walt Disney World album to add that track to your collection.

The biggest new album-only track on both coasts is "The Little Mermaid Medley." It's amazing, beautifully arranged and a joy to listen to. Whether or not it justifies buying the whole album (if you already own most of the tracks) is up to you, but note this: The WDW version is about a minute longer than DL's, as it contains queue music and sound effects.

Moving on to the rest of the new pieces:

Walt's original park and the re-born California Adventure are both well represented by this set, and there are some very intelligent, creative choices here. The nicest surprise is the inclusion of Mater's Junkyard Jamboree rendition of "Welcome to Radiator Springs", which is one of the only Mater songs not included on the park CD The Music of Cars Land! "Funiculi, Funicula"  perfectly captures the whimsy of Luigi's Flying Tires (all that's missing is the sound of the air jets). "Radiator Springs Racers" is the brilliant ride-through mix from the Cars Land CD: It deserves its spot as a new park classic.

Other new highlights: A wistful, mellow "Pecos Bill" from Frontierland, plus great Fantasyland instrumentals of "Bibbidi Bobbidy Boo" and "Touch the Sky." I...think...these are from Fantasy Faire.

Back at DCA, the Red Car Newsboys strut their stuff in "A Suitcase and a Dream," while "The Three Little Pigs" is a great jazz instrumental from the Carthay Circle Restaurant.

I only have one complaint about this set: No Five and Dime, my favorite DCA live entertainment. Ah, well, maybe next time.

Right off the bat, we all know two discs worth of tunes are not enough to do justice to the wealth of amazing music at the Florida resort. What's here, however, is terrific and--for the most part--well-chosen. Epcot gets the best representation, with the Hollywood Studios and Animal Kingdom getting the short end of the stick.

There are fewer brand-new tracks on this already-excellent collection, but the new selections are great. Right now I can't stop listening to "Test Track." And as a classic Disney animation fan, I love the two tracks from Storybook Circus, both wonderful interpretations of the score from Dumbo. The instrumental of New Fantasyland's "Be Our Guest" is mellow and fun.

I do find it odd, however, that with all the great music at Walt Disney World to choose from, this album spends twenty minutes representing two stunt shows. Great stunt shows, to be sure (and one featuring John Williams' classic Indiana Jones themes), but...twenty minutes? When Star Tours gets less than one minute of representation? And when both full stunt show tracks already appeared on the previous edition? Something's a bit out of balance here.

Looking Toward the Future

There is, of course, an easy way to fix that imbalance and make both the DL and WDW collections better than ever: There's no reason these digital collections have to remain limited to the space available on the physical CD versions. All the attraction, ambient, fireworks, parade and live show music could be part of these sets. Storage space is no longer an issue. All Disney has to do is open the vault and let the digital cash registers ring.

Overall, these two albums represent some of the most famous and imaginative music tracks in the history of American entertainment, now available online for the first time. "The Merrily Song" from Mr. Toad's Wild Ride is now on iTunes. Technology rocks.

For a list of all Disney park albums available on iTunes, please click here.
Posted by Rich T. at 1:13 AM