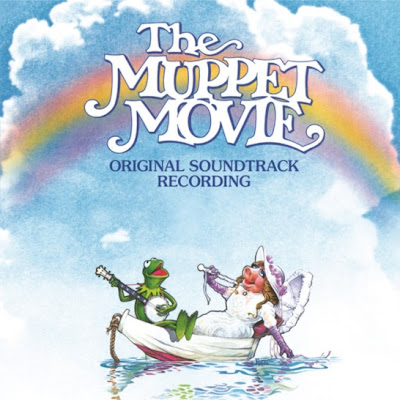 It's been a long, long wait for Muppet fans, but the wonderful, original 1979 soundtrack album that introduced "The Rainbow Connection" to the world has finally been released on iTunes and Amazon MP3.

Listening to this little masterpiece is like welcoming an old friend back home. The sound quality is terrific, the performances are incredible, and the Paul Williams tunes have gotten even better with time.

Of course, this album's been released to coincide with the film's debut on Blu-ray, Be sure to read Estelle's review of the movie at This Happy Place Blog and Melissa Sue's spotlight on the disc's bonus features at Mouse on the Mind.

The Muppet Movie is a charmer, and the music has always been one of its greatest strengths. The album stands on its own as a smoothly-flowing musical romp through Jim Henson's timeless world of optimism and wonder. If you've never heard this album, don't miss it--if for no other reason than to hear Miss Piggy try for that high note and fail so spectacularly--so jaw dropping-ly, mind-blowing-ly, glass-shattering-ly spectacularly. "Never Before" has a soundtrack been so funny and so touching at the same time.
Posted by Rich T. at 12:01 AM