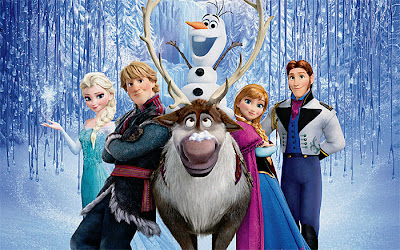 Full of surprises, intense emotions, dazzling art and terrific music, Frozen is Disney's best non-Pixar animated film in ages. The studio publicists have been advertising it as their best movie since The Lion King, and I agree; Disney hasn't produced such a powerful, crowd-pleasing and memorable film since that 1994 hit.

There have been a lot of solid, entertaining Disney films in the past couple of decades, including Pocahontas, Tarzan, Lilo & Stitch, The Princess and the Frog and Tangled. With Frozen, however, Disney returns to form with a heartfelt, confident, full-force musical full of new ideas, wonderful characters and unforgettable imagery. Plus, it's free of the smugness and cynicism that marred 2010's otherwise-great Tangled. Unlike so many other modern animated films, Frozen doesn't mock its fairytale roots and then hypocritically ask you to take it seriously for the final moments: Frozen tells its story with sincerity and heart from beginning to end. For the audience, the payoff is an exhilarating, emotional thrill ride through an unforgettable new fantasy world. 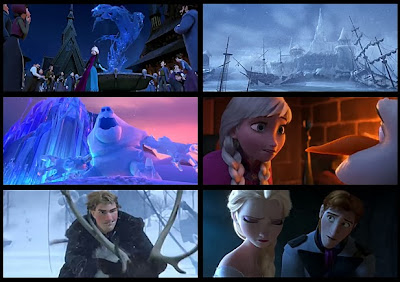 The film gets nearly everything right, performing a perfect balancing act of tradition and innovation while weaving a story quite unlike anything else in the Disney lineup.

In fact, one really can't discuss Frozen's twisty plot in any detail without giving too much away; I'll simply say it's a tale, loosely based on Hans Christian Andersen's The Snow Queen, about two royal sisters, Anna and Elsa, one of whom is blessed/cursed with the power to create snow and ice with the wave of a hand. From there, nothing happens quite the way you might predict as the refreshing narrative romps through scenes of powerful heartbreak, highly entertaining chases and some of the best comedy in Disney's history. 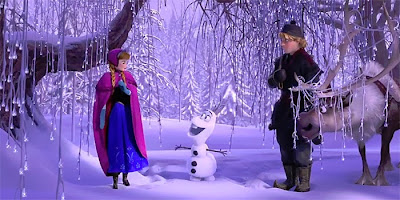 In fact, the comedy element  is a perfect example of Frozen's triumphs. We all know every Disney animated film has to feature at least one comic sidekick character. Disney directors are very good at handling this, but in many post-Lion King films, the comic element undermines the emotional power of the story (as in Pocahontas, Mulan, Hunchback of Notre Dame, Tarzan and Treasure Planet). In this latest fantasy, we get two comic sidekicks: Olaf the Snowman and Sven the (non-speaking) Reindeer. Both are endearing, both reveal additional depths to the human characters they accompany, and both provide big laughs without intruding on the tale's darker moments. Again, a perfect balancing act.

The film never loses track of its central conflict between the two sisters. The likable, optimistic Anna and the frightened, powerful Elsa are believable throughout, and both--in grand Disney tradition--belt out some great songs.

And, holy cow, those songs soar, and each one is indispensable to the story. Elsa's power ballad "Let It Go" is so beautifully staged and powerfully performed that it takes the crown for best animated Disney Princess song ever. It's certainly the most emotionally effective. Also strong is Anna's joyful "For the First Time in Forever" and the heartbreaking early plot-mover "Do You Want to Build a Snowman."

On the musical comic relief side, "Reindeer are Better Than People" is a brief, wonderful bit of character humor for both Sven the reindeer and mountain man loner Kristoff. Olaf the Snowman's song "In Summer" is a little masterpiece: It lightly parodies the standard Disney "I want" song while completely endearing the snow-guy to both the audience and the characters in the film. A fantasy character hasn't so swiftly and musically won hearts since a Scarecrow sang about wanting a brain in The Wizard of Oz.

Visually, the movie is breathtaking. Characters come to life with classic Disney believability, the icy landscapes dazzle with otherworldly beauty, and the many special effects--from magical storms to fifty-foot ocean waves--evoke awe and delight. Even the film's minor background characters are wonderfully rendered with personality and style: The ballroom sequence is one of the most beautifully executed scenes in animation history--Not in a spectacular manner, but simply in its complete you-are-there feeling of reality.

It's a near-perfect film, stumbling only a tiny bit during the film's last song, "Fixer Upper." It's a pleasant enough tune--and it performs its role in the plot perfectly--but its upbeat pop style doesn't quite mesh with its mystical setting. I'd count it as three minutes of "passable" amidst the rest of the film's on-target flights of wonderment.

All in all, Frozen is one of those films that make you want to shake the hands of all the artists involved and thank them for creating such a terrific adventure. There were many moments in this film that had me in genuine suspense -- something I haven't experienced in animation since the Dreamworks masterpiece How To Train Your Dragon. This is a film that knows exactly what it wants to be: Frozen is an unapologetic, earnest, full-blast classic princess musical -- but it's a unique and refreshingly unpredictable one, and it arrives packed with enough magic, spectacle and thrills to satisfy any type of movie goer.

No one could ask for a better Holiday surprise from Disney.
Posted by Rich T. at 6:55 PM