Alice Drops Out of Netflix on January 4th 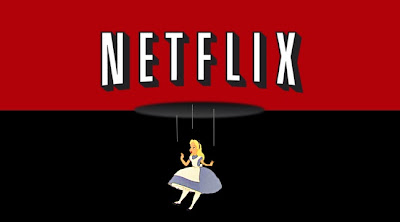 First of all, Happy New Year, everyone! I wish I had better Netflix news than this to start the year with, but if you subscribe to the service, you've only got a couple of days left to stream one of the most unusual Disney classics (and a particular favorite here at Mouse Troop).

After months and months of steadily building up an impressive library of Disney films, the service is dropping one confused little girl, a grinning cat, a stressed-out rabbit and a pack of armed playing cards; Alice In Wonderland will disappear from the Netflix streaming service on January 4th.

I'm sure I'm not the only Disney fan surprised that Alice is the first major drop; Of all the Disney animated classics, Alice in Wonderland has been more or less in steady video release ever since the dawn of VHS. Along with Dumbo, Alice has been one of the "always there" Disney classics, never locked away for hiatus in the infamous "Disney Vault." I'm sorry to see it leaving the streaming lineup.

So, if you subscribe to Netflix and don't already own Alice In Wonderland in some format, the White Rabbit's watch is ticking. Boil some tea, make some bread-and-butterfly sandwiches and take one last drop down the rabbit hole before this wildly imaginative film, one of the strangest productions ever to emerge from Walt Disney Studios, vanishes from Netflix like a grinning Cheshire Cat.
Posted by Rich T. at 8:19 PM